Smart home wireless networks: to mesh or not to mesh? 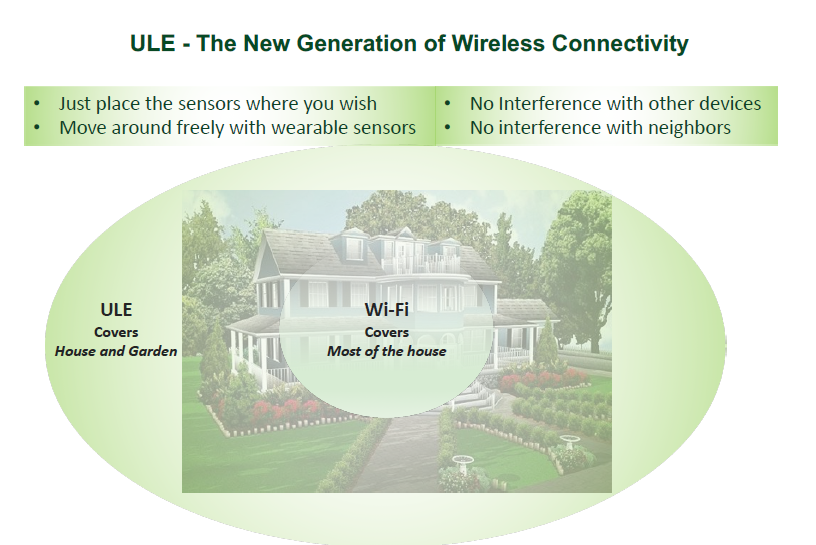 This article, by Avi Barel, Business Development Director, ULE Alliance, looks at the different approaches for smart home wireless networks, and considers the benefits and challenges of different topologies. The image below depicts an example of a mesh network. 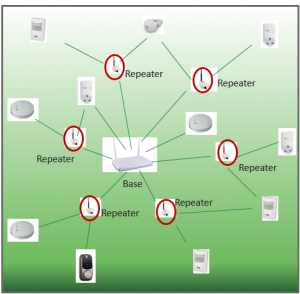 Mesh network topology for standards based wireless sensor networks is presently regarded as the state of the art, but could this be considered as a benefit more of good marketing, rather than the result of any underlying technology advantages. Several of the standards are based on the IEEE 802.15.4 specification; Zigbee and Thread among these. Z-Wave is based on ITU-T G.9959.  These are short range (10m), narrow-band radio communication standards. A standard like 802.15.4 can support a variety of network topologies. Its basis is as a star topology, though it may also support tree and mesh topologies.

These technologies have been around for over a decade. They share the communication frequency with other radios (2.4GHZ or 900MHz for 802.15.4 and 900MHz for ITU-T G.9959) and are therefore prone to interference in such congested spectrum. This can result in a loss of packets sent between network components. In addition, technologies operating in these spectrum bands are required by the regulator to “consider their neighbors” – i.e. technologies operating at the same frequency – and must transmit at a limited power, resulting in a limited range.

So, is mesh a solution to a challenge, rather than an inherent benefit?

To achieve these goals, repeaters in these networks must be “always on” in order to perform the routing functions. This means that they must be connected to an external power source (as opposed to battery operated). This poses a challenge during installation as this requires power outlets in the right locations. To be fair, this element is less severe in the case of Z-Wave, as each node can act as a repeater and devices that are connected to an AC plug can serve as repeaters, but the range challenge remains.

Then we need to consider that going through repeaters introduces communication delays; this is not an issue when delivering data, but these delays do make mesh networks unsuitable for real-time, time-sensitive applications such as voice transmission.

If the underlying communication protocols used by Zigbee, Thread, Z-Wave and so on were able to communicate reliably over a long range, then the network topology would be significantly simplified, and repeaters and mesh topology would not be necessary.

Wireless networks are getting more sophisticated

The more modern standards bring a new set of performance characteristics which simplify the network architecture and bring more capabilities. Wireless sensor networks can no longer be thought of as methods by which “just few bits” of data need to be transmitted in order, for example, to broadcast an alert of an event. In the case of a genuine, real-life alarm event, we want to receive maximum information and it’s likely that “just few bits” may not be enough anymore.

This is where ULE (Ultra Low Energy) enters the stage. ULE can operate with the simpler star topology and therefore avoids a need for repeaters. ULE operates on a dedicated frequency band (1.9GHZ in Europe and 1.8GHz in USA) which means that interference is not a factor and consequently ULE doesn’t suffer from packet losses. ULE is based on the well-known, well-established and flexible DECT technology. Historically, DECT is more well known as a platform for voice communication, however, nowadays DECT supports a wide variety of different applications and market verticals and can be regarded as a tactile short-range wireless technology for both voice and data.

In fact, DECT / ULE radio is the only short-range communication technology that guarantees high quality secure voice communication, in parallel to data. This is a claim that even Wi-Fi, with its remarkable bandwidth, cannot make.

Since ULE doesn’t compete for frequency resources with other technologies, it is allowed to use a strong transmission signal over a long range: 60m in the building and over 300m in the open. In the smarthome environment, this enables coverage of both a house and its garden. Figure 2 depicts the same distribution of the sensors as in Figure 1, but this time using ULE.

This image shows the same network with ULE: 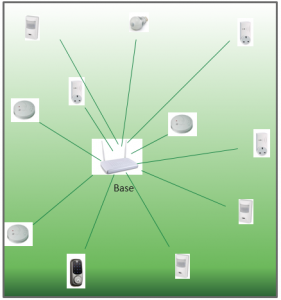 In fact, and in a manner that could be said to be simply ticking the functionality box, the ULE standard does support repeaters. These are used solely for range extension beyond the physical radio limits to cover very large buildings and offices, and large gardens (over 300m range). The ULE repeaters operate with minimal delay, so they can still be used for real-time signal delivery, such as voice.

What benefits do long range and interference free operation bring to consumers – all without the need to mesh?

The simplicity of the star topology delivered by ULE technology has several direct advantages for the consumers:

We couldn’t finish on this topic without touching on single point of failure. Resilience is cited as one of the advantages of mesh networks compared to the star topology networks: if a device in the network fails, other devices can replace it. Let’s examine this claim:

In a network there would be one concentrator, which supervises the network and also connects the network to the outside world (the Internet). The concentrator may be standalone or integrated with the home gateway (router). If this device fails, then the network becomes “brain dead”, without the ability to communicate to the outer world. This is correct for both mesh and star topology networks.

If a sensor fails, then no other sensor can perform its job and the function performed by the sensor is lost. This is also correct for both mesh and star topology networks.

In the star topology networks these are the only possible failures.

In the mesh network a repeater may fail, and then other repeaters should assume the relay and routing tasks which were performed by the failed repeater. This is said to add to the resilience of the network. However, such problems simply don’t exist in a star network, which covers a long range and operates in an interference free manner. This means that with an ULE-based star network, there’s no need for self-healing networks, as there wasn’t an issue to solve in the first place!

Hopefully by now, and if you are still with me, you will agree with the conclusion that star topology networks like ULE, with long range and interference free operation, can provide the most robust foundation for wireless sensor networks.

So, in other words, why mesh, when there is no need?

For more information on the ULE standard, visit this link

A few months ago, IncisorTV reported on the partnership between the EnOcean Alliance and Aruba Networks. Aruba had joined the Alliance in order to facilitate cooperation on the development of solutions for hyperaware smart buildings. More recently, Aruba has announced...

For optimized Wi-Fi 6/6E performance, look beyond the module

This feature from Awanish Mistra, Director of Business Development at NXP looks at the sixth generation of Wi-Fi, known as 802.11ax or simply Wi-Fi 6. This is gaining momentum, building on its combination of high speed, low latency and high device density. Add to that...